Crude Oil Is Breaking The Range

Crude oil gathered its breath and caught a bid in June last year. It paused briefly in August and then continued higher, racing to a top in January. That created a 5-month rising channel. But as I wrote here last week, crude oil had a change of character then. The pullback into the February low established a wide sideways consolidation. It got back to test the top of the range at the end of March but could not crack the ceiling and fell back.

The higher low in April, seen in the chart below, then served as a launching point for crude oil to move back higher. And Thursday it did break the ceiling and closed at a new high. A multi-year high. This was a price level not seen since November 2014. What does this mean for the price of oil going forward? 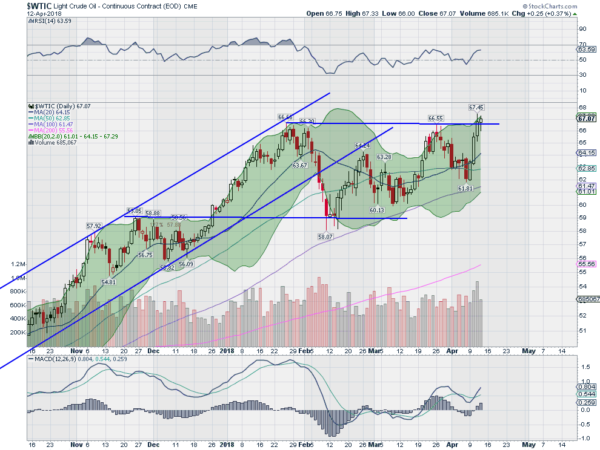 The next major price level is around 75. That served to kill a run higher in 2006, and it also was the center of broad consolidation in 2010. The round number at 70 could also create some stickiness, and then there is the Measured Move higher out of the consolidation that gives a target to about 83. None of these targets are good for the summer driving season, but could give a real kick higher to the broad market as lagging oil related stocks gain. Keep an eye in this sector.

The information in this blog post represents my own opinions and does not contain a recommendation for any particular security or investment. I or my affiliates may hold positions or other interests in securities mentioned in the Blog, please see my Disclaimer page for my full disclaimer.

This site uses Akismet to reduce spam. Learn how your comment data is processed.

Ahsan Baig - January 15, 2020
0
BYCO planning to be a leader in Furnace oil in Pakistan and Middle East Petroleum Marketing Business of BYCO is making strategic steps which may...

Tutorial # 04: How to read ‘Hammer Pattern’ in Candlestick Charts?

BYCO planning to be a leader in Furnace oil in Pakistan...

Tutorial # 04: How to read ‘Hammer Pattern’ in Candlestick Charts?

Amreli Steels will be having Target Price of Pkr 78/Share by...

Agha Hasan Abedi: the man who dared to dream big

ABOUT US
Inside Financial Markets is a joint publication of Pakistan Stock Exchange and Society of Technical Analysts Pakistan (STAP) published for the Members Society of Technical Analysts of Pakistan and Pakistan Stock Exchange and an official partners of International Trader’s Publication.
Contact us: admin@insidefinancialmarkets.com
FOLLOW US
© Inside Financial Markets - All rights are reserved
MORE STORIES

State Bank of Pakistan conducted OMO for following contracts – on...